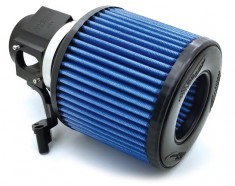 The Burger Motorsports plug and play air intake system unlocks up to 8hp to the wheels from your B36/B38/B46/B48 powered MINI engine. In addition to the extra power throttle response, turbo spool, and sound are dramatically improved, finally allowing you to hear your turbo spool up under heavy acceleration.

Our intake retains everything that is good about the OEM intake system including the cold air ducting and light weight heat shielding airbox bottom; but, completely replaces the restrictive top end of the OEM intake with new high flow ducting and an inverted cone performance air filter to match.

The system is CNC machined from billet aluminium, anodised black for a clean look, and includes a reusable inverted cone high flow performance air filter. Install takes only minutes and is fully reversible. Made in the USA.