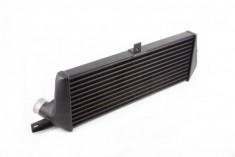 We took one of the very first UK Mini R56’s produced and immediately set to work to improve the OEM intercooler.

We did this with the first ever ground breaking innovative L Shape intercooler core design.

Many other companies simply copied this design, but Forge still remain the clear market leader due the exhaustive core testing undertaken in the development stages , We were not content to just use the first air core we could buy from China .

As a reduction in intake air temperature increases the density of the charge mixture within the combustion cylinder, any temperature reductions will equate to more power. This intercooler is constructed using a combined 80/40mm high thermal efficiency core, with a 250% larger surface area and a 125% thicker base core, to achieve the best possible results.

In fact, even in relatively low road speeds/air velocities, our intercooler was able to better the OEM unit by 9°C, with greater improvements being achievable during greater speeds during track testing. The replacement intercooler is supplied with all the mountings to allow ease of installation.