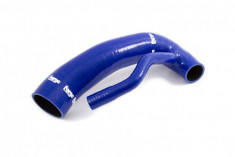 A silicone inlet hose for the BMW Mini R56 N18 with the Cooper S petrol engine. The hose is constructed from the highest grade european silicone and fabric reinforced allowing it to withstand geater temperatures and negative pressures than the original organic rubber hose. The hose is available in a choice of Red, Black and Blue, simply select your choice in the options below when ordering.

Please note that some engines have additional sensors in the intake pipe, which will need to be tapped into this pipe to fit.