Please note that we will be closed from Friday 25th June - Monday 28th June.
Any orders placed during this time will be processed upon our return on Tuesday 29th June. 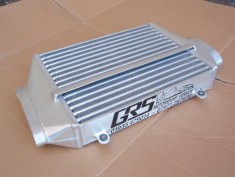 GRS Motorsport has spent many months in 2004 designing and developing this intercooler with a special innovated designed diffuser which is the first of its kind. This was launched to the world last August. Many hours of rolling road testing have been done to assure this intercooler is the best intercooler of its kind on the market today.

They carefully selected the right ‘tube’ & ‘vain pitch’ to ensure the core is right for this type of top mounted intercooler. The core is the same thickness as the original to allow maximum air flow from the bonnet scoop, but to achieve greater cooling has a greater surface area.

The end tanks have been specially designed to insure a ‘ram air effect’ is achieved through the core to achieve maximum cooling. ‘Boxed end tanks’ with sharp edges do not work as well as ‘Tapered end tanks’ as the charged air can become very lazy and turbulent within the intercooler and increases the pressure drop across the intercooler.

The standard intercooler on the Mini Cooper S will only keep Air Charge Temperatures (ACT’s) down to a satisfactory level with boost levels of no more than around 8-9psi. Once the boost pressures have been raised the ACT’s associated with the higher boost levels can be excessive for a standard intercooler. As ACT's rise, power is lost due to the air containing less oxygen. The GRS Motorsport Intercooler has been designed to keep the ACT's to a satisfactory level. When the GRS Motorsport intercooler was tested on the rolling road it showed no more than 38 degrees at all times, at 13-14psi, thus ensuring that maximum power is always available even in hot weather.

This intercooler is known as the ‘Motorsport version’. It’s for those that are looking for every single ounce of bhp that can be found.

As shown in the pictures the inlet side has a diverter welded between each of the tubes to allow better flow. Testing showed a 5bhp increase over the normal GRS intercooler, the comment from the driver was the car seemed slightly more responsive. Tests were carried out by a customer in Italy using a rolling road.

The ‘Motorsport’ version intercooler now has a diverter welded between the end tanks, this helps spread the air from the bonnet scoop evenly over the core. This new design has shown a noticeable improvement in the cooling capabilities.

The intercooler is available in powder coat finishes, but please note that theory suggests satin black dissipates heat better, so we cannot guarantee that the intercooler will be as efficient if another powder coat colour is chosen.