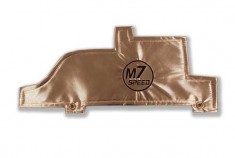 M7 constantly searches for innovative technology and ideas that can be engineered to work for the MINI. Our latest brainchild, packages the ultimate heat-resistant material called aerogel into a heat shield designed to reduce heat soak from the exhaust manifold. Aerogel is nano-techology used by NASA for a variety of applications. Now M7 has taken the heat shield concept to a new level with the M7 Aerogel EX.


The Goal: Cut down on the ever-destructive heat soak in the engine compartment, without adding complex, hard to install parts that will eventually break down or fail in some way.

The Solution: The M7 Aerogel EX Heat Shield that fits on top of the existing aluminium heat shield above the exhaust manifold/header. It's so easy to install you can truly do-it-yourself.

The Testing: We decided to bite the bullet and invested in some serious data logging equipment and a Thermal Imaging Camera that would give us both hard numbers and visual feedback to the thermal heat load under the hood. The testing showed some amazing results. The data logging revealed an amazing 65.8ï¿_ Delta in regular driving (both runs were identical) with some very small deviations in speed and the number of stop lights that turned red. The run was executed with mixed driving on the freeway at high rpm to generate as much heat as possible and stop and go traffic on surface streets.

Something else to remember is that the test was done with an M7 DFIC intercooler that will flush more cool air in to the engine compartment than a typical stock (or stock-style aftermarket unit) making the numbers even more impressive.

The Result: The coolant reservoir and the steering pump reservoir stays much cooler, along with the peripheral areas in the engine bay (including intercooler). Bottom line, the entire engine compartment remains much cooler during a driving cycle.

The top layer is made from bright reflective silver fabric with 3" M7 logo stitched in to show your admirers you only buy the best for your Mini.